Test you poker skills and compare your actions to the odds in this interactive article. I have concocted a simple little test to see how good a player you really are.  Read the scenario, note your answers and compare how you played to our experts.
A full analysis of the hand complete with a play-by-play breakdown of the odds and percentage is at the end of the article. If at any point, you fold or go all-in, jump to the appropriate section (Flop, Turn, or River) and see how favorable or unfavorable the odds were at that stage of the hand. 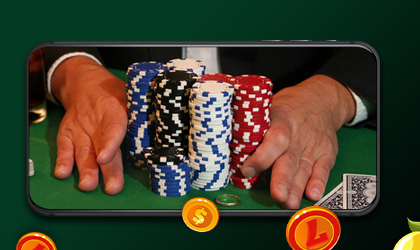 You (Player X) are one of 300 players remaining (out of an initial field of 500) in a multi-table No Limit Texas Hold ‘em tournament. For this hand, the blinds are relatively low, 50/100, and you’re currently on the button. When the cards are dealt all but two opponents fold, the small blind (Player Y) and the Big Blind (Player Z). You’ve been dealt an unsuited A-10 and the action is to you. Would you:

Both players check/call the flop comes: 10(s)-Q(s)-3(h)
After seeing the flop, Player Y peaks at his hole cards, pauses for a moment, and then raises 125 chips. Player Z plays with his chips, chats a little with Player Y and then finally calls. The play is to you. Do you:

Assuming both opponents remain in the hand, the turn comes: 3(clubs).
With the turn, Player Y immediately fires out another raise, this time for 200 chips. Player Z again hesitates and then calls. Do you:

Upon seeing, the river players Y and Z both check. Do you:

How’d you do? Compare your choices to those of our experts below.

Now that you’ve made your decisions and played the hand exactly how you would have in a real poker room, let’s see if you would have made the right or wrong choices. 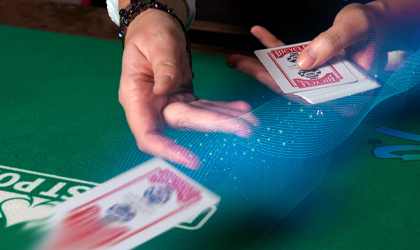 You were dealt an unsuited A-10 and all but two opponents at the table folded prior to the flop. Given the relative strength of your hand, coupled with your positional advantage, the suggested play here is to raise.
Simply calling allows players with weaker hands the opportunity to see a cheap flop and possibly make a winning hand.
Below is a breakdown of each hand’s initial relative value.

The Action: After your pre-flop bet/call, notice the reactions of your opponents. Most notably in this particular situation is the fact that neither player re-raised, suggesting that at this stage you’re hand was the best.

The flop improved your hand with middle pair. However, both the queen and the potential flush draw threaten the value of those tens. While in reality neither opponent actually made a hand, they each improved their chances of winning on that flop, with Player Y’s hand now almost identical in strength to yours.

The Action: Part of the decision regarding how to continue this hand rests on the actions of your opponents. Since you got a piece of the flop, calling or raising is called for.
But simply calling can show weakness on your part, especially if you raised earlier in the hand. By raising, you can continue to threaten your opponents‹possibly even driving them out or at the very least get a read on how they view the strength of their own hand.
Furthermore, since Player Y re-checked his hole cards and then paused before raising what was only a moderate amount compared with the pot, it suggests a semi-bluff.

Although on the surface the turn didn’t help your situation, in reality it drastically widened the gap between your hand and those of your opponents.

The Action: Because Player Y raised so quickly following the turn, and
Player Z once again called, it suggests a bluff and a draw respectively.

Again, this card failed to improve your tens, but neither did it improve the hands of your opponents. At this point, your tens are best and unless another player manages to get you to fold the hand, the pot is yours. 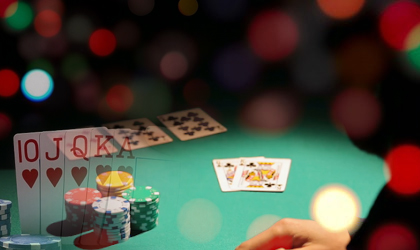 The Action: Since both players Y and Z checked, they have in essence surrendered the hand to you. Had one of the two made an unusually large bet or gone all-in at this point it may have made the decision difficult. But as it happened, you’re free to raise.
While raising in this situation is unlikely to put any extra chips in the pot, since neither opponent made a hand, you should still do it here to try and force them to fold.
Not only does this confirm your aggression and confidence, but it also prevents the other players from glimpsing your strategy for that type of hand.

Although not always readily apparent, throughout this entire scenario Player X was in the lead. But just as during a real game, the odds fluctuated with each new card to hit the board changing that lead from formidable to miniscule in seconds. As these changes occur, solid players adjust their betting to meet the situation while taking into consideration the actions and reactions of their opponents each step of the way.