“I Won the Jackpot” is the sound of dreams coming true. With the ever-increasing progressive jackpots offered by casinos, the Big Hits are what we seek.

This series of reports details some of these winning stories from the lucky winners: 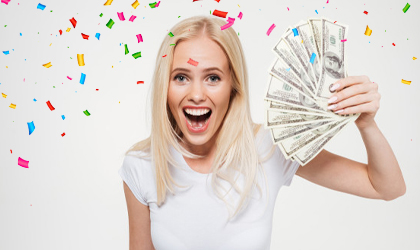 A 92-year-old man has accomplished the near impossible -- winning a Megabucks jackpot twice. It's the first time someone has won the well-known jackpot more than once. Local Vegas resident, Elmer Sherwin won the top Megabucks slot machine jackpot worth. In 1989, Sherwin won $4.6 million from a Megabucks machine at the Mirage.

After he won the first jackpot, Sherwin said it became his "life's dream" to win it a second time, Cannery representative Aimee Worth said.

In a statement issued by IGT, Sherwin said he wanted to win the award for a second time.
"I'm glad I finally hit; I've been trying to do it again," he said. He plans to surprise his family with the news.
"I want to see the looks on their faces when they hear," Sherwin said, noting that he soon plans to try for his third jackpot.

The Megabucks machine, made by International Game Technology, is a dollar slot machine with a building jackpot that requires a $3 bet to hit the top prize. The jackpot resets at $7 million after a jackpot is won and begins to build again until someone lines up the Megabucks symbols on the machine again.
The chance of winning the Megabucks grand prize is less than one in 10 million.

Awards are paid in annual installments or a lump sum.

A Tale of Two Casinos:
A day in the life of Taj Mahal and Aladdin casinos involves the Quarter Million$ progressive and two tales.

First up in this amazing day of two wins for a combined total of $674, 820 is the Taj where Frances Perkoski of Olyphant, PA. choses a new version of Pamela Anderson Lucky Wheel slots. Her first playing venture with this new machine grabbed a big win of $374,094.

Secondly at the Aladdin: We zoom over to Vegas, 3000 miles away, to find Thomas Kosik of Niles, IL who was contemplating a food break when he stopped to put $20 in a Quarter Million$: In the Money slot.. After just a few spins, up popped the winning symbols for a $300,726 progressive jackpot win. 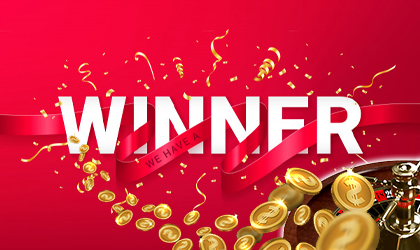 Jo Ann Argyris, a 58-year-old resident of Boulder City, NV has been a frequent visitor to the locals’ casino scene in Vegas for the past 8 years.

This self-employed single mother of two and grandmother of three became an instant millionaire while playing the Millioniser Hyperlink penny slot game at the Sunset Station Casino in Henderson.
Within a year, her millionaire status was reinstated with another $1 million jackpot at the Railroad Pass Casino playing the same slot game.

After her initial payday, Argyris paid off her mortgage, did some home remodeling and whisked here family off to a Mexican Riviera cruise.
Jo Ann was ready to cash out while playing at the Railroad Pass when the symbols lined up just right. “I didn’t even realize I’d won the million until my daughter told me. I said “No, then I looked up at the slot. Oh my goodness”, and put my head into my lap and cried. “I did not expect it. I knew it would happen, but I did not know it would happen again this fast. It was only 10 months.”

What to do with her second windfall? This twice-lucky lady says, “My car is only four years old and has just 45,000 miles on it. Why would I want to go out and spend $60,000 on a car that I really don’t need? So, what I did was pay off the loans on my children’s cars, gave them some money and put some away for my grandchildren. Then, I gave some money to my sister.”

“When my mother, who lives in California found out, she called me up and said, “You know you’re taking me to Italy this time. I want to go for a cruise in the Mediterranean, so we’ll go there to visit and then on to Rome for a few days.”

Is three times the charm for this slot player? Time will tell.