Video Poker: Get the Most Out of Double Bonus Poker

There is no one perfect strategy for video poker. When we check our online gaming options and finds a game with a higher than usual payoff on flushes, we must adjust our strategy to maximize flush opportunities.

In a game that pays a big bonus on four Aces, we'll sometimes ignore other potential winners to make a run at the jackpot.

How much do we gain by making such strategy adjustments? Surprisingly little. If we start out by learning expert strategy for 9-6 Jacks or Better, we gain only a few tenths of a percent by memorizing all the special cases that go into more complex games.
A prime example is Double Bonus Poker. On the negative side, Double Bonus pays only 1-for-1 on two pair, instead of the 2-for-1 return on Jacks or Better. To balance that off, there are many pay table enhancements, starting with big bonuses on four of a kinds. 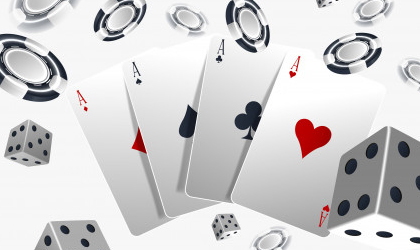 To someone who wants to play at expert level, all those changes mean a full card of special cases and strategy switches. But let's say you don't want to make learning the game a full-time job. Applying Jacks or Better strategy to full-pay Double Bonus brings an expected long-run return of 99.8 percent, just four-tenths of a percent shy of the 100.2 percent expected with experts' strategy adjustments.

If you want to close the gap between the 99.8-percent return using Jacks or Better strategy and the 100.2-percent return at expert level, there are some important areas to watch:

Partial flushes:
In Jacks or Better, four-card flushes are good hands to build on. In full-pay Double Bonus Poker, where flushes pay 7-for-1, we extend that to three-card flushes. Let's say we're dealt a hand with a 10, 8 and 5 of spades, along with a 9 of hearts and a 2 of clubs. In Jacks or Better, we'd just discard the entire hand and pray for something better on the draw.
In full-pay Double Bonus, we keep the three spades. We even keep three cards to a flush in 10-7-5 Double Bonus if the hand includes two parts of a straight flush. Dealt King-Queen-8 of hearts, we keep all three, instead of keeping just King-Queen, as we would in Jacks or Better.

One tricky decision comes with four parts of a flush and a high pair, such as Ace-King-Jack-8 of hearts with a Jack of clubs. In Jacks or Better, we'd keep the pair of Jacks for the sure payoff on the high pair and potential for more. But in 10-7-5 Double Bonus, we keep all four hearts.

In the lower-paying 9-7-5 Double Bonus, a 99.1 percent game in which the full house return drops to 9-for-1, we still make these flush pays. We revert to something more like Jacks or Better strategy if the flush return is dropped to 6-for-1.

Partial straights:
Upping the straight payoff to 5-for-1 makes inside draws worth our while. In Double Bonus, we draw to hands such as 9-8-7-5 or Jack-9-8-7. In Jacks or Better, we draw to inside straights only if the hand includes at least three high cards.

Aces: Adjusting to the possibility of an 800-coin jackpot for four Aces, we make a play that would be regarded as very strange in Jacks or Better. In Double Bonus, if we're dealt a full house that includes three Aces, we discard the other pair and hope for the fourth Ace. It's a 2-in-47 shot that we'll fill out the quads, but when it happens, that jackpot makes all the discarded full houses worthwhile.