You Needn’t Outthink Computer to Win

I wouldn't call Bob a friend. He's a friendly acquaintance, someone I've met several times at book signings. Video poker is his game, and he loves the variety he can find in online gaming. Something was troubling him, and he sought me out.
"Well, a friend of mine told me about an article she'd been reading. It said that studying strategies is a waste of time, that no one can beat a video poker computer, so you might as well trust to luck. "What do you think?"

I think someone has taken a fact -- video poker games are computerized, whether online or offline -- and drawn a silly, illogical conclusion.
"How is it silly? I mean, I'm not likely to outthink a computer, am I?"
I wouldn't know. Chess players outthink computers all the time. But that's not really relevant for video poker players.

Because the video poker program is not trying to outthink you. All it does is shuffle and deal the cards. The odds are the same as if a human was shuffling and dealing from a physical deck, except that the computer does it much faster. 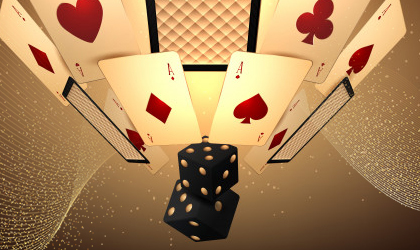 You missed the important part. The video poker program IS NOT TRYING to beat you. It's just dealing the cards. When you play computer chess, the program is trying to beat you. I should know. I have a chess program that I beat regularly on level 1 and hold my own on level 2, but it kicks my butt on level 3.

But video poker is not computer chess. If you want to compare it to a computer game, it's more like Solitaire. The computer deals the cards, and that's the end of its involvement. You make the rest of the decisions. Sometimes it's possible for you to win, sometimes it's not, but your decisions affect the outcome without any further interference from the computer.
"Why do you say the computer is not trying to beat you in video poker? Doesn't the casino want to take your money?"

Of course it does. Casino games are set up so that the odds are in the house's favor against nearly all players. In video poker, the pay table determines those odds, as well as the game's payback percentage. But the computer has no decisions to make that would affect the odds.

It's not as though it dealt five cards, then said to itself, "Hmmmmm, there's a low pair on board, and a Jack. The experts will keep the low pair, so I think I'll cross them up and include a Jack among the draw cards." If the program did that, then you could say the computer was trying to beat you. But it doesn't do anything of the kind. It randomly shuffles the deck, and deals the cards. That's it.

"No tricky moves, because it has no moves?" Exactly.
"So it really doesn't matter that video poker games are computerized?"

It matters, but only because you can play so much faster on a computer than you can with a human dealer. I've often thought that video poker would make a fun table game in offline casinos, but it would be so slow there wouldn't be much profit in it for the house. Average players can play 400 to 500 hands an hour on a video poker machine, and experts can play 800 hands or more. On a table, that probably would drop to 40 or 50 hands per hour. To make that profitable, casinos would have to institute some awful pay tables.
"I think I'd rather take my chances against the computer."
Me, too.