Pretty much every poker player has sworn off the game at least once. I’ve done it probably 10 times. When I have a few consecutive sessions where luck screws me over time and time again, I walk away from the table swearing I’m never coming back. Then I’m back in the game the next day. We all do it. You’ll probably do it numerous times as well. But, you know what, at the end of the day, poker is a great game despite the crazy bad beats. The biggest difference between winning and losing poker players is winning players are able to shake off the bad beats. The weak players can’t handle the ups and downs. Poker is a mental game. If you don’t have a long-term approach to the game, you’re screwed. You need to have the mentality that the outcome of each individual session doesn’t matter unless you played well. If you played well and lost because of bad luck, so be it. The reason you should adopt this mentality is because every poker player suffers bad breaks from time to time, but the good players finish ahead in the long run. So if you have a bad day at the table because the cards screwed you over, it shouldn’t bother you. If you had a bad day because you played poorly, you need to work on your game. If you had a good day but still played poorly and got lucky, you need to work on your game.

Dealing with the Swings is Easier Said than Done 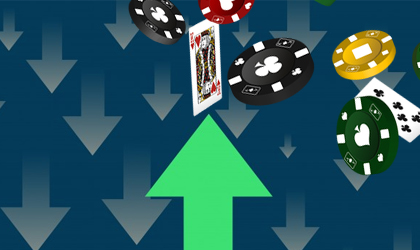 I’ll be honest with you. What I said above is a lot easier said than done. As much as I’d love to sit here and tell you that I never get bothered by bad beats, that’s simply not the case. However, I have gotten a lot better at handling bad beats compared to my earlier years. But when an opponent cracks my set of aces in a $1,000 pot by hitting a gutshot straight draw on the river, I can’t help but be angry. I’m human! Being upset with a bad beat is okay. However, if you do get upset, you should walk away from the game. Pick up your chips and come back the next day when you’ve cooled off. The best way to deal with a bad beat is to walk away from the table and go for a walk, go have a few drinks, go have sex, or do whatever it is you enjoy doing away from the poker table. 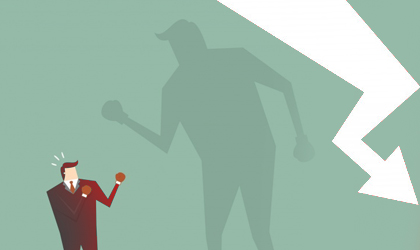 When you play poker when you’re upset, we call this “on tilt”. Playing poker on tilt is a bad idea. When you’re on tilt, you can’t focus enough to play solid poker. I’ve played while on tilt far too many times and I regret it. I can’t even begin to guess how many times I’ve donked away all my money playing in a game where I was angry due to a few bad beats. Had I just got up from the table until I cooled off, I would have a lot more money to my name, that’s for sure! This is exactly why you should have the mentality that the outcome of each individual session doesn’t matter in the grand scheme of things. Train your brain to accept bad beats, knowing that small losses won’t harm you in the long run. Think of it this way: would you rather lose a little due to bad luck or a lot due to playing on tilt? The answer is pretty clear.

How to Minimize the Bad Beats

There are certain times where it’s impossible to avoid a bad beat. Sometimes you’re going to be in a pot where no matter how big you bet, your opponent simply won’t have the discipline to lay down his gutshot straight draw and will crack you in the river. But there are also many cases where I see a player take a bad beat that could have been avoided. If you want to limit the number of bad beats dealt, don’t slow play top pair and don’t under-bet the pot. When you have top pair and there is $100 in the pot, don’t throw out a $20 bet. If you do, you’ll basically be asking to get cracked on the river by a drawing hand.