There was a manhunt for an escaped killer near

Indians was chasing him. And I was there for

The editor of OFFICIAL DETECTIVE MAGAZINE was on the phone. He was calling me at the Phoenix Gazette in Phoenix, AZ and it was a business call. 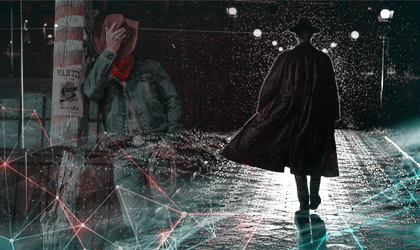 He opened the conversation with a question: "I understand you are a freelance writer and you have actually written some articles for our magazine. Is that true?"

"Good. I may have an assignment for you. We are a national police magazine and right now as we speak there is a manhunt going on in Show Low, AZ. for an escaped killer. That's about 200 miles north of Phoenix. There is a posse of cowboys and Indians who are on horseback and in pickup trucks searching for this gun and we would like you to cover it for our magazine. If you're interested, we'll pay you $400. Will you take the job?"

This was 1976 and that sounded like good money to me. On Saturday morning, my brother Legs and I headed north on Black Canyon Highway, bound for Show Low. The town was named after a card game in the late 18th century. Two ranchers who were lifelong enemies got into a card game one night after doing some heavy drinking. They played a poker card game called Show Low and the loser agreed to sell his ranch to the other player. As a result, most of the street names are related to a deck of cards. One rancher lost, he left town, and the town was renamed.

Show Low is cowboy country. It sits in the magnificent mountains of northern Arizona I had called the sheriff's office and a spokesman told me the posse was camped along the highway just south of the town. She told me to look for a gathering of pickup trucks, horses and men and wished me good luck.

Sure enough, we found them about 15 miles south of Show Low. I spotted smoke from a camp fire and pulled off the road. About 40 armed men, most of them law enforcement officers, were gathered around a big camp fire. Their horses were corralled nearby next to a cluster of pickup trucks. A cook in a white hat was roasting a young heifer over an open fire.

A muscular young man in jeans, western shirt, boots and hat walked up to me. He was wearing a badge and he crushed my hand in a handshake that made me wince.

I explained why we were there and he graciously invited us to have lunch with them.

"As soon as we finish eating, we're going back on the killer's trail," he said. "We think we've got him trapped on Ragtop Mountain. It's about five miles from here. Do you play poker?"

"Good. After we catch the b-----d we're all going to have a poker game here in camp. You're welcome to celebrate with us."

We finished lunch -- it was delicious -- and the posse members mounted up. I fell in line behind them and we headed off on a dirt road toward Ragtop Mountain. It was a good road and we had no problem keeping up with the posse. 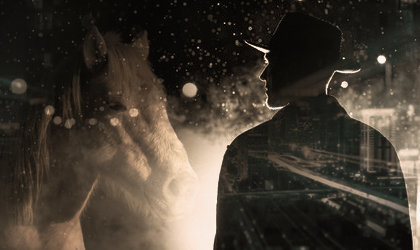 Scott kept his horse ahead of us about a quarter of a mile. The terrain got rougher. Suddenly I heard him shout. He pointed in front of him and I was stunned. A man was running through the high desert underbrush. He was hatless and he ran with a limp. Scott spurred his horse into a fierce gallop. As he neared the fleeing killer, the deputy lowered himself in the saddle and leaped on him. They hit the ground in an explosion of dust.

By the time I got to the scene, the prisoner had been handcuffed and two armed deputies were standing guard over him. The escapee had been on the run near Show Low for about three days. One of the posse members asked him casually, "You got a bullet wound in your leg. You've been without food or water for about three days. Just how much farther could you have gone?"

The prisoner looked at him with a smile.

"Why don't you take these handcuffs off me, give me a five-minute start, and we'll find out," he said.