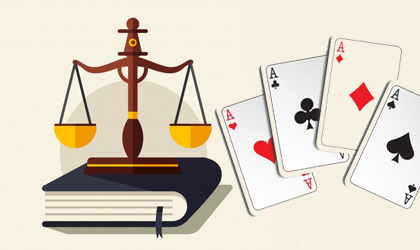 Caribbean Stud Poker may be played only on approved tables equipped with the necessary electronic equipment and signage, and which displays the Caribbean Stud Poker table layout. A single deck of cards will be used. Players do not play against other players. Each player may play only one hand following each shuffle of the deck.

Each player must make an ante wager by placing the wager in the designated “ante” wagering area in front of the player’s position. The ante wager may not exceed two dollars and fifty cents.

Each player may place an additional, optional wager by placing a token in the designated coin-in slot in front of the player’s ante.

After all progressive wagers have been made and before the dealer starts to deal the cards, the dealer operates a keypad by which the dealer locks out the coin-in mechanism. After the hand is completed, the dealer will clear the lockout so the players may wager on the progressive jackpot for the next hand.

Any dealer tip delivered as a wager shall be placed on the “ante” only, and may not exceed the value of the player’s ante. The dealer may not accept a tip wager on the “bet” area.

Immediately prior to the commencement of play and after each round of play has been completed, the dealer shall shuffle the cards. Following shuffle and cut, the dealer deals five cards to each player and to the dealer, either face downward and one at a time in clockwise rotation among the players and the dealer, or in a five card group dispensed by a mechanical shuffling device. The fifth card dealt to the dealer only, which shall be the bottom card of the group of cards dispensed by the shuffling device, shall be dealt or turned face up. The first player to receive a card, or cards, is the player to the left of the dealer; the dealer receives cards last. After all cards have been dealt, the dealer shall place the remaining cards into the discard rack without exposing the cards. 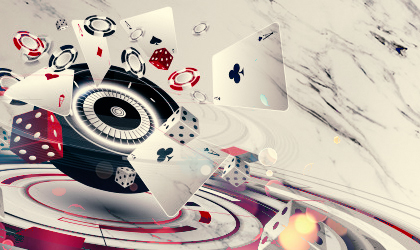 An incorrect number of cards dealt to any player constitutes a dead hand for that player only. The player receiving the misdealt cards retains the player’s ante and any bet. An incorrect number of cards dealt to the dealer constitutes a misdeal to the table and the players may play their hands for the purposes of the progressive jackpot only. If there are no progressive jackpot hands, all hands at the table are dead and the players retain their antes and bets.

The player now picks up the player’s cards and must decide either to fold (surrender ante) or to bet (bet equals two times ante). (a) If the player folds, the ante wager is lost. In any player order, the dealer collects first the ante and then the cards from each player who has folded. As the cards are collected, the dealer will spread them, count them, and then place them in the discard rack. (b) If the player wishes to play the hand, the player must make an additional wager, equal to exactly twice the amount of the ante, by placing the wager in the “bet” area, behind the ante, in front of the player’s position.

The dealer will then spread, count, and collect each player’s cards individually. The cards of players who have a hand qualifying for a progressive jackpot payment will be left on the table face up.

A games supervisor will verify the hands, if any, which qualify for a progressive jackpot payout, will announce the amount, and will pay the player.

When all player wagers have been made, the dealer will compare the dealer’s hand to the hand of each player who has made both “ante” and “bet” wagers. The higher poker hand, between each player and the dealer, wins.

The dealer compares hands, pays winning wagers, and takes losing wagers, beginning with the player to the dealer’s right and moving counterclockwise around the table.

After paying or taking each wager, the dealer must spread the player’s cards, count them, and place them in the discard rack before the dealer moves on to the next player. The cards of players who have a hand qualifying for a progressive jackpot payment will be left on the table face up.

A games supervisor will verify the hands, if any, which qualify for a progressive jackpot payout, will announce the amount, and will pay the player. The player’s card will then be collected and placed in the discard rack.

Player hands qualifying for progressive jackpot payments shall be paid according to the following payment schedule, which shall be displayed by table signage or on the table layout: