Home / Articles / Land Based / Flight of the Eagle

Flight of the Eagle

(In the days of the early West, the Indians and wagon train

members didn't just fight. They spent some of their time on 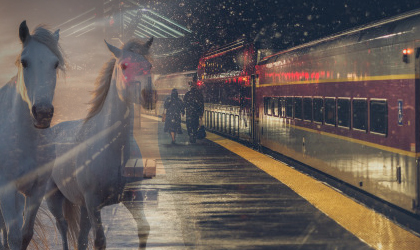 The wagon train was long and plodding.

More than 95 covered wagons pulled by oxen and horses stretched across the arid Kansas prairie, following specks in the sky that turned out to be eagles and hawks.

Following the wagons were scores of riders on horseback making up the families from Ohio, Pennsylvania, Virginia and other Eastern states all found for the golden land -- California.

That was where their future home was waiting. California!

Where the sun shone over 300 days each year and the fertile ground produced harvests of corn, peaches, grapes and other products that could be exchanged for cash and where a day's labor could earn a man a living to provide for his family.

A thick-bearded plainsman in buckskins whose face was tanned and weather-beaten by the sun, wind and rain was at the head of the long caravan. He knew the trail and the dangers that faced the hardy travelers. As he peered ahead, a cloud of dust appeared on the horizon. A lone horseman, galloping furiously, headed toward them. The plainsman eased his rifle from a scabbard into a forward position.

The rider was a trail scout, sent ahead to make sure the trail was clear. He galloped up to the lead wagon and pulled the lathered horse to a skidding halt.

Barely able to get the words out of his mouth, the Scout said, "Pawnees up ahead. About 100 of them! Don't know their intentions but we better be ready!"

The wagon master nodded. He didn't seem overly concerned. The wagon master kept the train moving forward at the same steady pace it had been making for the past 10 days. The Indians came into view wearing big smiles and waving at the travelers. The plainsman breathed a sign of belief. They weren't in for a fight. They were friendly. The wagon master rode ahead to greet them.

The head of the Pawnee tribe shook his head and said they were in the mood to do some trading.

"Maybe have some horse races. Play a little poker. You like"," he said with a wide trin.

"Sure," the plainsman said. "Just keep the games and the races honest."

"We be honest if you be honest," one of the Indians said, laughing.

The wagons circled for the night and the Pawnees were welcomed inside the circle. The Indians traded turquoise, blankets and leather goods for provisions and a few guns. Then the horse races began and some of the Indians gathered in a circle. Several decks of cards appeared and the men reached in their pockets for money. 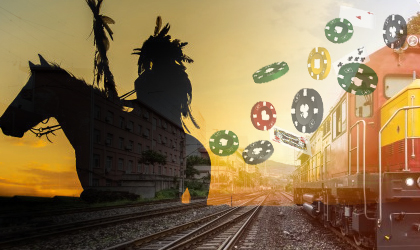 Goods, leather goods, blankets and provisions exchanged hands. The races and card games lasted long into the night. The Pawnees staged some dances and the Indian girls gladly mixed it up with some of the single riders. Some couples slipped back into the bushes or into one of the wagons where they could be alone.

By morning most of the Indians had left. Some were losers, some were winners, but more importantly, peace had prevailed. Luck was determined by the turn of a card or the roll of the dice or the speed of a fast horse.

The chief was the last member of the tribe to leave. He exchanged a handshake with the plainsman and touched his heart with the symbol of peace.

"We see you again," the chief said. "Have a good journey."

"The same to you, amigo," the plainsman said.

"You have some good poker players," the chief added. "They tough to beat."

"Your men are tough, too," the plainsman said, grinning. 'At least nobody got scalped."

The chief smiled, saluted him and kicked his horse into a gallop.