There are various interesting theories and stories on how the game of craps evolved through history. The game of craps usually refers to street craps and bank craps. With the Internet, even online craps has become quite popular. Here is an overview on the history of the game and how it gained popularity through different parts of the world. 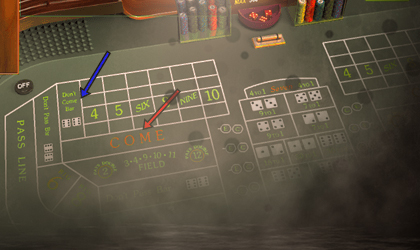 There is some evidence that suggests that the game of craps may have evolved during the Holy Roman Empire. In those times, soldiers in the Roman legions used to shave down pig knuckles into the shapes of cubes. They used to then play with them by tossing them onto their inverted shields as a game while in camp. It is here that the term "to roll the bones" got prevalent. After becoming prevalent in Europe the game gained popularity in United States also.

Another theory states that the game of craps is much similar to a game called azzahr or Hazard that was played during the Middle Ages by the Arabs. The formal rules for Hazard were established by Montmort early in the 1700s. The roll of lowest value in that game was called crabs. While many feel that this may have been the origin of the name, some houses of thought feel that the word evolved from the French Crapeaud (for toad). Some also feel that the French, trying to be amiable, adopted the term from the English, but spelt it in the French way as crabes. In the early 1700's, the game crossed the Atlantic to the French colony of Acadia.

In approximately around the year 1755, the French lost Acadia and the Acadians relocated to Louisiana. Here they dropped the French crabes and called the game crebs or creps. By 1843, American English caused the term craps to gain prevalence. By 1885, other terms like crapsgame, crapstable, and crapsshooter evolved and the final s in craps was removed to aid terms like craptable, crapshooter, crap game, etc. However the s in craps is retained where reference is made only to the game of craps or to the losing roll in phrases like 'he craps out' or 'he rolled craps'.

The game of craps has not just a rich history but a rich base of players too. Most casinos and gambling joints offer the game of craps to customers due to its popularity. It is commonly offered on the Internet in the online scenario and at gambling casinos in the real time conditions.