How To Play 2-7 Single Draw

In 2-7 single draw also known as lowball poker, you are dealt five cards face down, before placing your bets. The key difference between this lowball poker variant is that the Ace is considered high only in this game. The winner is decided by who has the lowest combination of five cards in their hand. 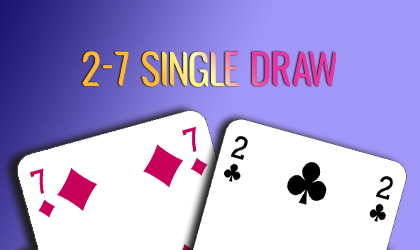 This 2-7 poker variant is a single draw game, this means that a player may throw out any cards in their hand and draw different cards only one time. A player can also "stand pat" which means that they keep the cards that they were dealt and not draw any new cards. A player has the choice to discard up to 4 cards in most game played.

In the game 2-7 draw, you are trying to get the lowest hand possible which would be 2-3-4-5-7. The following hands count against you, straights, flush, 3 of a kind, and pairs. Another of the major difference in this game over other lowball games is that a straight of any kind is considered a high hand. For example 2-3-4-5-6 is not considered a straight only without any low hand possibilities. 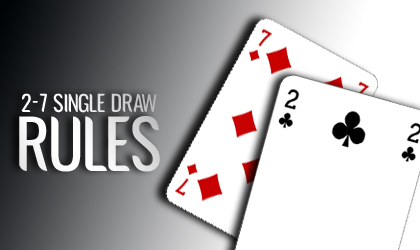 The game begins when small and big blinds are placed. Then all players are dealt 5 cards and a round of betting ensues. The player directly the left of the big blind begins the betting. A player has a choice of calling or raising the big blind bet or folding the hand all together.

If it is a game with no limit then the player is to raise at least twice the amount of the big blind if they choose to raise. Once the first player decides what he/she is going to do, then the rest of the players make their decision to call, fold, or raise going clockwise around the table. The betting round ends when each player has folded or called the highest bet.

After the first round of betting is concluded, each player then can decide to discard any unwanted cards he has in his hand. The dealer will go to each player still in the game starting with the small blind and ask for discards. At this time a player can discard up to 4 cards or “stand pat” and not discard any cards at all. After every player left discards or stand pat, another round of betting is started. It ends when the highest bet made is called.

Once the second betting round is ended, all the remaining players who have not folded go to showdown. Starting with the first player to the left of the dealer who is still end the game, players’ show their cards and the player with the lowest combination of 5 cards is the winner. If the lowest card match in different hands then the second lowest card is counted and so forth till a winner is determined.