How To Play 2-7 Triple Draw

Since 2-7 Triple Draw starts out just like 2-7 Single Draw. The difference is an obvious one; in this variant you get three draws to get the lowest hand instead of one.

After the blinds and antes are place, each player gets dealt 5 cards. Starting with the player to the left of the big blind, betting ensues. Each player has the opportunity to bet, raise or fold and the round ends when the highest bet is called. 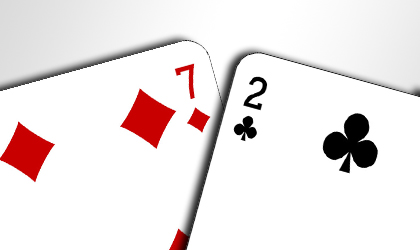 After all players are taking care of, another round of betting gets started with the same options above starting out with the closest player to the left of the dealer that is still in. After the betting is finished a second draw is then started, and goes the same way as above.

Again after the second draw there is a round of betting and with each player still involved getting the same betting options to bet, raise or fold. For those that are still in after this round, the third and final draw begins.

The final draw works just like all the rest. Each player has one last chance to discard and improve their hand or stand pat. After this last draw, the final round of betting starts and at its conclusion the players left show their hand. 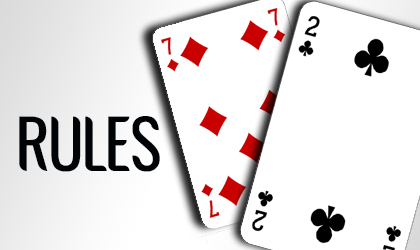 After the final betting round is over, there is a showdown, showdowns in 2-7 draw are different from other showdowns in more typical games such as Texas Hold’ Em.

There is a "low" hand system instead of the normal hand values in other games. Basically, you are trying to keep and play the worst possible poker hand you can.

Aces are high, and straights and flushes are bad and count against you. If there happens to be a tie, you would look at who has the lowest version of that ranked hand.

If two players were to have a pair, or a straight then the low hand would be the winner. For example, a pair of threes beats a pair of nines, and seven high straight beats a nine high straight.