How to Play 7 Card Stud Hi/Lo

7 Card Stud Hi/Lo is a game for 2 to 8 players, needing only a single deck of 52 cards. Players are each dealt 7 cards throughout the hand, the first two face down, next four face up, and the final card face down. If the best Low hand qualifies, the highest and lowest hands split the pot. 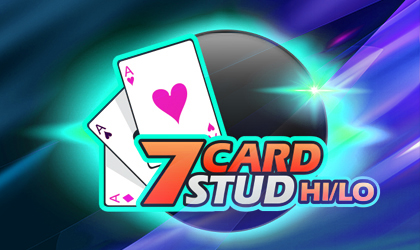 7 Card Stud Hi/Lo is generally a Fixed Limit game, though No Limit and Pot Limit varieties are not too uncommon. Therefore, we’ll define the Fixed Limit betting structure, including forced Ante and Bring-In Bets, in this “How to Play 7 Card Stud Hi/Lo” tutorial.

Ante: This is a very small wager placed by all players before the hand begins. The Ante may vary by the location of play, but is generally 10-25% of the low-end stakes.

Bring-In: A forced bet of 50% of the low-end stakes, placed by the player with the lowest ranking Door Card after the initial deal. The Door Card is the first face up card dealt. If two players have the same Door Card, the lowest suit determines the Bring-In Bettor (suits rank low-high: Clubs, Diamonds, Hearts, Spades).

The high hand is the same as most poker variants, following the standard 5-card hand rankings. The highest ranking hand wins half of the pot.

The 5-card low hand must “Qualify” to win. Low hand qualifications are:

No card higher than an 8

The game begins with Ante Bets, followed by each player receiving 3 cards. The first two are dealt face down, followed by the face up Door Card. The player with the lowest Door Card places the Bring-In Bet (50% of the low-end stakes). The player to his left starts the betting round.

4th Street: Each player receives a 4th card, face up. The second betting round begins. From here on out, the player with the highest Open hand (face up cards only) will start each round of betting.

5th Street: Each player receives a 5th card, also face up, followed by the third betting round. In this and all remaining betting rounds, all Bets/Raises must equal the high-end stakes.

6th Street: Each player receives their 6th card, again face up. The fourth betting round commences.

7th Street: Each player receives their 7th and final card, this time face down (if possible – see “No More Cards?” below). The last betting round takes place.

If you do the math, 8 players getting 7 cards would require 56 cards. A deck has only 52. Should no player Fold, there will not be enough cards to complete the deal. If this happens (very rare!) the 7th Street is dealt as a single face up Community Card for all players to assume as their last card.