How To Play Badugi

Badugi Poker is also known as Asian Poker. With this form of poker, you have to have the lowest Badugi. Originated in Korea, Badugi is played like Triple draw where the focus is on the best low hand rather than the best high hand in regards to how a hand is won. Like its standard poker cousin, rules and structure of the game are almost identical (like getting 3 draws) with the exception that a hand consists of four cards instead of the traditional five.

Badugi refers to a hand that there are no two cards the same suit or the same value. Only the card of the lowest value is saved in your hand if there is more than one card of the same suit. This is how a hand becomes a one, two or 3-card hand. There are three different forms of betting. There is the Limit, Pot Limit and Half Pot Limit form of this game. 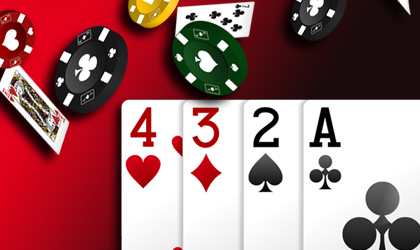 Limit Badugi you can only bet in increments of 1x big blind for round one and two and 2x big blinds for round three and four. Betting is stopped also called capped at four bets a round.

The Half Pot Limit Badugi has the same rules as Pot Limit with the exception that the most a player can bet is half of the current pot. An example of this would be small blind of $2 and a big blind of $4 so the next player can bet up to $5 ($2+$4+$4/2=5).

Those who remain in the game have a decision to make as to what to keep and what to throw away. First off, if there are two of any suit or two of the same value cards, they need to get rid of one of those cards. If there are none matching those criteria then get rid of the highest ranking cards in your hand.

After you have chosen how many cards you want to discard, the dealer will then replace them. Another round of betting resumes and the player has the same decision to bet, raise, call or fold.

The same procedure follows for the second and third draw. After the final draw the remaining players go to showdown. The showdown is when all players show their hands and determine the winner starting with the first player clockwise from the dealer.