How To Play Pai Gow Poker

Although there are a lot of other poker variants that originated outside of the US, there is only one that comes from China. It is called Pai Gow and is a fast-paced and fun alternative to traditional poker style card games. Pai Gow Poker is an American version of a Chinese domino game of the same name. 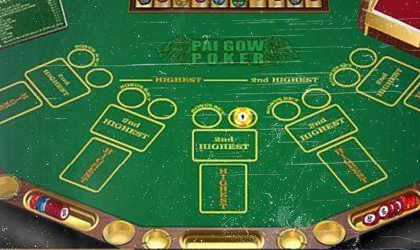 The American version is also called double hand poker and replaces the Chinese number with Standard English numbers. The game uses a 52 card deck, although at some casinos, the Jokers are included, which is rare among many casino games. In Pai Gow Poker, the player is playing against the banker, which could be played by the dealer or by another player. Each player is dealt a total of 7 cards, but must use those seven cards to create two separate hands.

As you might guess, the only possible hands with the in front hand are pairs and highs. However, traditional hands apply with the five card hands. This can be a very tricky game to play because you have to decide which way to split the cards to give your two hands the most value. The player is responsible for making sure the 5 card hand is higher than the two card hand. The house charges a 5% commission on overall wins. There are 4 possible out comes in Pai Gow:

The 4th outcome is a tie. Dealer wins all ties, so 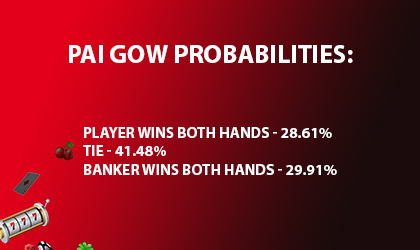 The joker, also called the bug, is played in Pai Gow Poker at some casinos and assumes the position of an ace in a 2 card hand and also in the 5 card hand unless completing a flush. In some Californian casinos, the joker is actually wild, but this will be a rarity otherwise.

Basic Pai Gow strategy involves trying to set the highest two card hand possible so that you always have a way to at least push against the dealer, thereby limiting your odds to lose. However, if you have only one pair, you are better off placing the pair in your high card hand and placing the two highest remaining cards in the two card hand.

Pai Gow poker can be played for hours and not show a large net gain or lose. The game is a little bit faster paced than other poker variants, such as Let It Ride, which means you have to be quick with your decisions.