How to Play Razz Poker

Razz poker is a form of stud poker that is played ace to five low, meaning that it is played for a low hand rather than a high hand. Players are dealt 7 cards and must make the best 5 card low hand (non-paired) possible out of those cards. Unlike community hand games, such as Hold ‘em, Razz is played with individual hands. The best possible winning hand is a 5 – 4 – 3 – 2 – A, where the Ace always plays low. This hand is called the wheel, or a 5 high. Unlike some poker games that only 8 high hands are considered low, in Razz, any low hand qualifies. 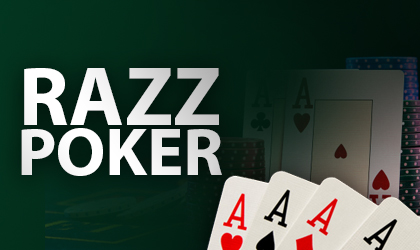 Unlike the holdem games, A Razz game consists of antes instead of blinds. Each player at the table bets a minimum amount before each hand starts. Normally this antes is about 1/5 the lowest bet possible at the table.

Once the antes are established, the dealer deals out three cards to each player. Two down and one face up. The face up card is called the door card. The highest door card showing at the table is forced to make a "bring in" bet which is equal to 1/2 the amount of the lowest bet at the table. This constitutes a bet and as low as no one raises the "bring in" player will see the next card. If there is a raise the player must call it to see the next card.

There are 5 rounds of betting in Razz and it will normally be found played as a fixed limit game. This means all the bets are at a fixed level and all incremental raises are a multiple of that amount.

After the antes the first round of betting occurs after the first three cards are dealt and the high player has placed the bring in bet as described below. The "bring in" player can raise and bet the total amount of the lowest possible bet. Each player, in turn going clockwise from the bring in player will each get a turn to fold, call or raise the bring in bet. All bets are made in increments of the low limit bet size. 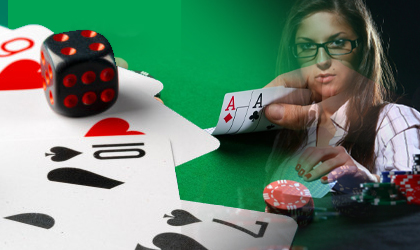 The next round, called fourth street begins with one more card dealt face up to all the remaining players in the game. This time, the player with the lowest hand showing starts the betting. Play again proceeds clockwise from this player and all get a chance to fold, call or raise. Again, all bets made this round are increments of the low limit bet size.

Next is fifth street where a fifth card is dealt face up to all remaining players. The same procedure as previous round with lowest hand starting but this time all bets are made in increments of the high limit bet size.

A sixth card is dealt on sixth street and the same procedures are followed as per fifth street.

Lastly comes, seventh street. The seventh and final card is dealt to the remaining players face down. Again the same procedures are followed as per the previous street. There are usually 8 players to a Razz table and in the unlikely event all 8 players are still in on this street, there are not enough cards for all. If this happens one card will be placed in the middle of the table for all to share as their last card.

Razz Showdown - Of the remaining players, the last player that bet is first to show their cards. Each player, going clockwise, then has a chance to either show their cards or throw them in the "muck" and not show them. The lowest non paired 5 card hand wins the pot. In case of a tie, the next lowest card determines the winner and so forth. If all cards match, the pot is split between the winning hands.

Razz is one of the most difficult games to learn and play. It is hard to find in casinos but it is a part of the World Series of Poker Tournament. If you are partial to a stud game and looking for a change, Razz could be a fun alternative.