HOW TO RANK POKER HANDS

The poker hands are the same in all poker games, so understanding the ranking is essential before you get started. Don’t worry though, they’re easy enough to get the hang of.

In any poker game, the object is to compile the best 5 card hand that you can. The possible poker hands from lowest hand to highest hand are as follows… 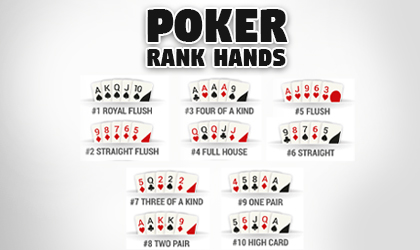 Two pairs will beat one pair. A pair of two’s and a pair of three’s will beat a pair of Aces. Again, two players with the same hand would use the fifth card as the kicker to determine the winner.

THREE OF A KIND:

Three cards of the same value will beat two pairs. So, three two’s will beat a pairs of Ace’s and Kings. In some poker games, more than one player can have the same three of a kind hand and again a kicker would be used to determine the winner.

A Flush is five cards of the same suit. For a Flush, the cards need not be in sequential order. So, a 4, 7, 9, Jack and Queen, all hearts, would beat an Ace high straight. Watch out for that Ace high Flush though.

If all of your cards are of the same suit and in sequential order, you have a Straight Flush! So, a 2 of clubs, 3 of clubs, 4 of clubs, 5 of clubs and a 6 of clubs will beat an Ace high Flush of clubs or any other suit. 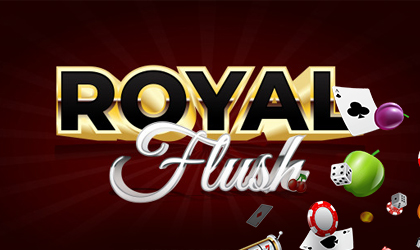 A Royal Flush is as Ace high Straight Flush. So, a ten of hearts, Jack of Hearts, Queen of Hearts, King of Hearts and Ace of Hearts will beat anything except a Royal Flush of a different suit and a 5 of a Kind. Up against another Royal Flush, you would tie. You would only encounter a 5 of a kind playing with wild cards, but the 5 of a kind would win.

Only when playing poker with wild cards will you encounter such a hand as this, for there are normally only four of each value in each deck of cards. At any rate, this hand beats everything. The only exception to this rule is when it is discussed and determined otherwise prior to dealing the hand.

So, that’s about as basic as poker hands can be broken down. This is just the beginning though, have no fear. There are many variables in poker and things are not always as they seem. Do yourself a favor and start out within your limits as you learn.