All roads lead to Las Vegas. At least that is the way it

seems to me any time I join Willie Nelson in singing

"On the Road Again."

There are many different ways to arrive at a destination when you're on the open road. America's highway system is an intricate network that is the envy of most of the civilized world. It never ceases to amaze me each time I travel it!

When I set out for one of my favorite destinations, which usually lies in the West or Southwest…

…I have my choice of traveling the southern or northern routes. Both have their attractions and I am sometimes torn as to which direction to go.

If I choose the southern route, I go through some of my favorite cities and states: Wheeling or Charleston, W.V. - home of bluegrass, the Grand OL; Opry and two of my favorite casinos.

My daughter Rossana lives in Charleston, S.C. where Blackbeard the pirate once ravaged the seas, and four hours driving time past Charleston is Jacksonville, FL., home of BestBet, an outstanding poker and horse room. 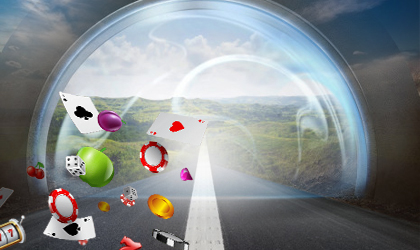 I have lived and worked in West Palm Beach, Naples, Ft. Myers and Marco Island, FL.

…I watched the magical green flash from Marco Island, sitting on the sun deck of a restaurant when the sun fell below the ocean.

And there are few coastlines more magical than Key West, where Ernest Hemingway wrote novels and raised cats that still roam the streets.

The southern route takes me through Alabama and the delta country of Louisiana and Mississippi, where luxury plantation life still exists in opulent southern splendor.

I lived in Mandeville, LA. and listened to Irma Thomas and her 10-piece band interpret the blues while the audience drank beer and ate crawfish in a swamp infested with alligators.

El Paso is the first taste of the West. Marty Robbins recorded a song called "El Paso" that goes:

"Down in the west Texas town of El Paso, I fell in love with a Mexican girl; nighttime would find me in Rosie's cantina, music would play and Falina would whirl."

In those days I was young and the night had no beginning and no ending. It was all part of life and I felt the pulsating beat.

I had left the old part of me at home and was experiencing the exciting new part of being alive and growing into adulthood. It represented the future, not yesterday, and I was content to live it. Each new place was different, with different tastes, smells and flavors, and I wanted to sample all of it.

The northern route out West was vastly different. It followed Route 66, America's Sweetheart Highway. The road took me past all-night diners and passed through Springfield, Joplin and St Louis had glittering casinos that never closed, dens bordering with danger where I could continue my education on how to be a better poker player

The tables would be serviced by attractive girls wearing red garters and black lace stockings. They had nicknames like Angel, Renee, Cupid or Darlin' and kept my glass full. Sometimes they would share a glass or two of champagne with me and help me celebrate life. The night went on until it vanished with the morning sun.

The St. Louis Arch is known as the Gateway to the West. My late father was a steel worker who helped build the arch at his plant near Dravosburg, PA. The arch is a beautiful creation, magnificent in its design I once rode the elevator to the top and saw the lights of the city of St. Louis spread out over 100 miles.

After St. Louis, comes the wide plains and prairie country of Oklahoma, Texas and New Mexico. Towns with colorful names like Tucumcari, Jackrabbit Flats and Gallup disappear in my rearview mirror, while a lone Navajo on a buckskin horse waves goodbye. A century or so earlier he might have taken a shot at me with his bow.

North of Albuquerque, I stop at a roadside stand and sort through the merchandise before settling on an Indian serape and a turquoise ring. My faithful Chevy Cavalier climbs the scenic mountain ranges until I find myself looking down at a long blue line that is the Colorado River. I am above the Grand Canyon and it feels like I am in the mountain of the gods.

In Kingman, AZ., I stop at a Greek restaurant owned by a friend. Mike and I have played poker against each other in Las Vegas and Laughlin NV. He is happy to see me and picks up the check. His hair and thick mustache are still black, but I suspect he has been adding coloring.

"Planning to visit Laughlin?" he says, smiling. "If you wait until I get out of my apron, I'll go with you."

I wasn't planning on making a side trip to Laughlin, but what the hell?

Mike follows me down the winding highway 23 miles to Laughlin. We pass through the ghost town of Oatman, AZ. where Clark Gable and actress Carol Lombard spent their wedding night.

The town is four blocks long and filled with would-be gunslingers carrying guns loaded with blanks. Main Street has a dozen wild burros looking for food handouts from tourists. They were once owned by gold prospectors and are a remnant of the past. 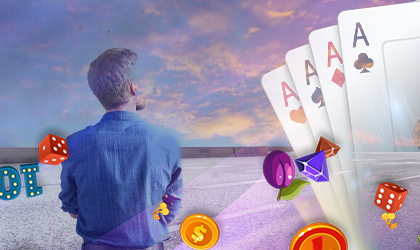 There on the left is the White Chief Mine where my old friend Charlie Stoll once excavated gold and silver ore. I wonder where Charlie is these days. He was a tough miner, a colorful character and gambler, and I am betting he is still alive.

Mike and I pull into Laughlin and stop at the Colorado Belle, the casino shaped like an old steamboat with a giant paddle wheel. We play some poker and shoot dice.

A parade of Mardi Gras dancers invades the poker room and attractive dancers in revealing outfits drape beads around our necks. One plants a kiss on my cheek and whispers, Good luck, honey' in a drawl that might have originated in New Orleans or West Texas.

That night I win at poker and I took myself a room at Don Laughlin's Riverside Casino. In the morning I have a great buffet at the Riverside and push off for Las Vegas.

I tune in on a country western song and sing along with Willie Nelson, "On the road again" as I pass over Hoover Dam and enter the outskirts of the city that never sleeps and that will always be a part of me.