Home / Articles / 101 / The Similarities Between Poker and Baseball

The Similarities Between Poker and Baseball

Poker and baseball are two of my favorite activities. Although there are many differences between the games, obviously, there are many similarities. In fact, I probably became a fan of poker because of the similarities to baseball. I’ve been playing and watching baseball ever since I can remember. When I was little, instead of watching cartoons, I was out taking batting practice or playing catch with my dad. I found the sport to be highly addictive. The same can be said about poker.

Both games require mental toughness. You can have the ability to hit a baseball, but if you are mental midget, you’ll struggle to be a consistent hitter. Ditto for pitchers. I’ve seen so many careers wasted due to mental issues. Remember Mitch Williams? He served up the game winning home run to Joe Carter in the 1993 World Series. That game still haunts him. He was never the same. Granted, Mitch never was a great closer for the Phillies or Cubs. He was merely average. But he had incredible stuff. He could strike fear into a batter at times. But his inability to control his emotions prevented him from having a great career. 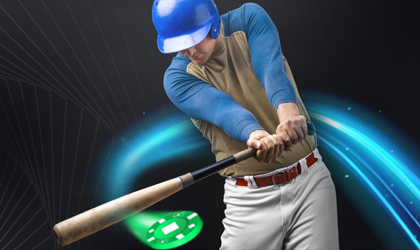 I also know a lot of poker players that have all the tools to be great except for being mentally tough. Poker and baseball are both games of ups and downs. The best hitters go through slumps. So do the best teams. In poker, the worst player at the table can take all the chips from the best player at the table on any given day, just like the worst team in baseball can beat the best team. Therefore, you have to be emotionally prepared to handle the ups and downs.

I understood that poker was a game where bad beats happen from time to time and unlucky days occur before I started playing regularly. I swore to myself I wouldn’t ever let these bad beats bother me or affect my game. I quickly learned how much easier it is to say I won’t let the bad beats get to me than to actually do it. Baseball players have the same dilemma. When a hitter is in a 0-15 slump, he becomes frustrated even though he knows every hitter goes through a slump. What separates the batting leaders from the weak players is an ability to be consistent at the plate, which requires mental toughness.

POKER AND BASEBALL ARE NUMBERS GAMES

Although statistics don’t prove everything in baseball, numbers are very much a part of the game. Teams that get on base at a high rate and get a large amount of extra base hits tend to score more runs than teams that put up mediocre offensive statistics. Pitchers that strike batters out at a high rate, consistently throw strikes, or a combination of both tend to give up fewer runs than pitchers that don’t. The goal of the game is to score more runs than your opponent.

Short-term success in baseball is also meaningless and proves nothing since any team can beat any team on any given day. The best teams, over a 162-game schedule, end up on top, so long as they remain healthy. The worst teams may have a few nice winning streaks throughout the season, but always end up with a losing record. The more games that are played, the more we know about how good or bad each team and player are.

Poker is the same. If your results over a large sample size are positive, you are a good player. There really is no way around it. Good poker players always turn a profit over a large enough sample size. Bad players, unless they hit a 1 in a million shot and won a major poker tournament that skews their overall results, will end up losing money in the long run. The numbers don’t lie. If you are a consistent winner, you are winning because you are good at poker. If you are a consistent losing player, you are losing because you need to improve your game.