Racetracks in North America offer a wide variety of races for horses to compete in and for horseplayers to wager.

The marquee races like the Kentucky Derby, Preakness and Belmont Stakesthat make up the Triple Crown or the highly lucrative races that make up the two-day Breeders’ Cup World Championships are known as stakes races. These are the races considered the highest quality by a track.

Stakes races typically require owners pay a fee to nominate and enter their horses in the starting gate with tracks funding the difference to make up the total purse. For example, the Kentucky Derby is a stakes race for 3-year-old Thoroughbreds run annually on the first Saturday in May at Churchill Downs in Louisville, Kentucky.

The 2015 Kentucky Derby offered a $2 million (U.S.) purse and carried an entry fee of $25,000 for each horse and a starting fee of an additional $25,000. The Kentucky Derby can accommodate a maximum field of 20 horses and typically attracts a field that large. If there are 20 starters, half of the guaranteed purse comes from entry and starting fees and the other half from the track.

Stakes races are usually the richest races at each track and frequently are contested on the weekends. Some racetracks, which run shorter boutique-style meetings, will run stakes races on weekdays. 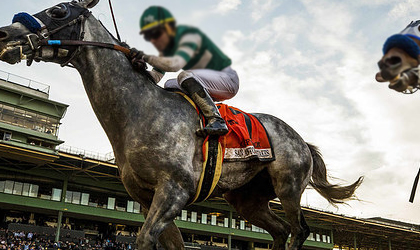 The most prestigious stakes races in North America are known as graded stakes and since 1973 they’ve been designated Grade 1, 2, or 3 either by the American Graded Stakes Committee or the Jockey Club of Canada’s Graded Stakes Committee. A total of 463 races were graded in the U.S. in 2015 – 110 Grade 1, 134 Grade 2 and 219 Grade 3. There were close to 300 other stakes races scheduled to be run in 2015 in the U.S.

Claiming races make up the bulk of racing programs across North America and they are races for horses that can be purchased for a specified price at the time of entry. Claims are made for horses before the running of the race and become the property of the new owner once the starting gate opens. All purse money goes to the original owner in the event of a claim. If there is more than one claim for a horse there is a random draw, or shake, between all interested parties for that horse.

Other fairly common races include handicaps, races that are close to stakes-quality in which the track’s racing secretary determines how much weight each horse will carry based on their recent success or lack thereof; starter allowance races, which are races run under allowance conditions for horses that have started for a claiming price within a specified period of time; and starter handicaps, which are similar to starter allowance races but the horses are weighted based on current ability, performance and form.