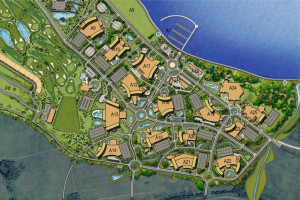 The first casino in the Yantarnaya (Kaliningrad region) special gambling zone in Russia was expected to open by September 1, 2015. Following is a press release from the developers...

On August 15, 2014 the results of a tender for the right to conclude a lease of land located in Yantarnaya gambling zone and owned by the Kaliningrad Region were announced. The winner was STC Group of Companies, which presented the project with a minimal investment of 45 billion rubles. The total area of land on which the right to lease was received is 99.5 hectares, the rent rate for a year is 15.5 million rubles.

STC Group of Companies presented all the necessary documentation, including the development project of the gambling zone Yantarnaya under the conceptual name Amberland. The creation of the project was entrusted to Steelman Partners – an international architectural firm specializing on the development of casino, hotel and entertainment facilities, having 30 years of experience in casino resorts construction around the world. Also to develop the concept was attracted AECOM Company – a global provider of services in the sphere of economy, management and construction for a wide range of markets, listed in 500 most successful companies and serving customers in more than 100 countries worldwide. The concept provides the development of the gambling zone Yantarnaya until 2029 with the minimal investment of 45 billion rubles.

STC Group of Companies is a subsidiary of Royal Time Group Investment holding, which specializes in real estate development projects all over Russia, including successful casinos in the territory of Azov-City gambling zone. According to the strategic view of the company STC Group of Companies is the global developer of the gambling zone Yantarnaya, attracting investors in the construction and managing infrastructure and other public facilities located within the area of 99.5 hectares.

According to the developed concept the future project presents a tourism and recreation city with a gaming component, the territory will have not only gambling establishments but facilities for family rest and recreation, offering a quality package with a high level and wide range of services. The project will have functional points of attraction, the so-called “drivers”, which will be the core of the integral territory development as well as the impetus for the realization of the region’s tourism cluster potential. The functional points include:

Construction of the I complex is scheduled to begin in autumn, 2014. Its construction is divided into two phases carried out in parallel:

Commissioning of the I phase with a total area of 18,000 sq.m is scheduled for the 1st of September, 2015. This phase includes the casino halls, restaurants, bars, VIP hotel and other areas providing the complex functioning.

Construction of the II phase with a total area of 40,000 sq.m is scheduled for completion in Spring 2016. The phase includes the hotel complex, SPA, conference and banquet facilities as well as other services specific to the level of 4* hotel. In addition to the above the II phase includes landscaping which is a promenade.

The project uniqueness will affect the image component and the investment attractiveness of the entire Kaliningrad Region, will result in a significant increase of the tourist flow. So according to the forecast of the international company AECOM, a tourism market of 500,000 tourists a year will grow to over 3 million people in 2025(an optimistic scenario) and to over 1.2 million people (a pessimistic scenario). The project will also open up new opportunities for the local population in relatively new areas of the economy and boost living standards by improving the quality of living conditions and the level of social and recreational infrastructure.

Royal Time Group together with STC Group of Companies are planning to make the presentation of the development project of the gambling zone Yantarnaya entitled Amberland at the XIII International Investment Forum Sochi-2014 together with the discussion of the investment proposals for potential investors whom the company is holding a series of meetings with in the frames of the event.

There are currently no news regarding Amberland Casino.

Several casinos and gambling halls are planned for Amberland.

Magic Crystal Casino: The first to open will start with 150 slots and increase that number to 500 by the end of 2016.

There is currently no information about upcoming events at Amberland Casino