This casino is closed. 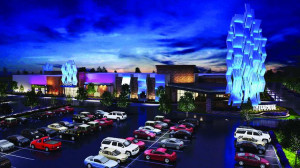 Update: The casino is expected to open in late 2018. Construction has stopped due to a lawsuit.

After more than a decade of delays, the Enterprise Rancheria, Estom Yumeka Maidu Tribe will restart its efforts to get its $186 million Fire Mountain Casino located on Forty Mile Road 5 miles south of Marysville, California opened. The Bureau of Indian Affairs (BIA) recently issued secretarial procedures for the tribe to conduct Class III gaming on its 40-acre trust site, effectively removing one of the obstacles faced by the tribe in its efforts to open the 140,000 square foot development.

However, the procedures issuance does not mean it will be smooth sailing for the tribe from here on, as the project, which broke ground on April 8, has its share of opposition, including rival tribe, the Cachil DeHe Band Of Wintun Indians of The Colusa Rancheria, operators of the Colusa Casino Resort. Also opposed to the casino, is another rival tribe, the United Auburn Indian Community (UAIC), which owns and operates one of the most lucrative casinos in the state, the Thunder Valley Casino Resort in Lincoln, which is situated just a half hour’s drive north of Fire Mountian Casino.

The World Casino Directory will continue to provide updates as they become available.

The resort, located between State Routes 70 and 65 adjacent to the Sleep Train Amphitheater, will offer bingo, electronic games, and only non-banked  card games unless the tribe’s gaming compact is approved in which case it will be able to offer the more lucrative Class III Las Vegas-style gambling. If successful the tribe may expand the casino and add a hotel, which was included in the original plans.

There are currently no news regarding Fire Mountain Casino.

Original plans called for as many as 2,000 slot machines. With built space (excluding the now defunct hotel plan) reduced by more than half, we are estimating 500-1,000 Class II machines will populate the floor, but this is just an estimate. If however, the tribe's gaming compact is approved, it will be able to expand the casino's offerings to include the more lucrative Class III Las Vegas-style gambling, such as banked card games like baccarat and blackjack, roulette, craps and RNG slots.

This casino has re-opened as Hard Rock Sacramento