Loading...
There are no available casinos for requested criteria.
Something went wrong. Please try again later.
Show as
Filter Casinos By

first opened on . They closed their doors permanently on . A new casino, has opened in its place.

Most of the casinos in Biloxi are located along U.S. Highway 90 (Beach Boulevard) with Palace Casino Resort just a few blocks north and IP Casino Resort and Boomtown along Bayview Ave.,  on the Back Bay.


Mississippi Coastal casinos which include not only those in Biloxi but also Hollywood Casino and Silver Slipper in Bay St. Louis, Island View in Gulfport, and Scarlet Pearl in D'Iberville (just across the Back Bay) make up more than half the state's gross gaming revenue, beating out Central and Northern MS casinos combined by a good margin. During the 2015 calendar year, the gulf coast counties posted up over $1.14 billion in GGR while the river counties clocked in with about $9.54b for total GGR of $2,097,066,095.60 on the year. In 2014, the last year compiled statistics are available, Mississippi ranked #10 in the U.S. by GGR from commercial casinos, according to the American Gaming Association; G2KG.


Growth was flat for several years due to the recession but picked up again in 2015 with 2016 looking to be another great year. Scarlet Pearl Casino Resort opened on Dec. 9, 2015, but it wouldn't be until January that the casino really began helping to move the meter for the Gulf Coast industry.


Biloxi has a long and colorful history of gambling. Although technically illegal, the Broadwater Beach Resort offered people from all walks of life the chance to gamble in a safe environment until open illegal gambling was shut down in the 1950's.


The first three legal casinos to open in Mississippi were in Biloxi. On August 1, 1992, the Isle of Capri Biloxi opened followed the same month by the President Casino Biloxi and the Biloxi Belle. It wasn't until October 1993 that the Mississippi Gaming Commission was formed.


Although some of the coastal casinos at some point had to temporarily shut down just to move cash to the banks in order to create space in the counting rooms for more money, casinos have not always had an easy time in Biloxi with Mother Nature as their most formidable foe. Hurricane Katrina wrought the most damage in the casino age when it struck on August 29, 2005. Two days later 90% of the buildings along the coast in Biloxi and neighboring Gulfport had been destroyed.


There are now eight casinos operating in Biloxi as well as Foxwoods Resort Casino at Biloxi Pointe which is expected to open in 2019.


The first casino to reopen after Hurrican Katrina was Imperial Palace (now IP Casino Resort & Spa). Beau Rivage Resort & Casino opened one year to the day from the storm. Boomtown Casino also reopened in 2006. The Hard Rock Hotel and Casino Biloxi was supposed to open September 1, 2005, but damage from Katrina forced them to delay opening until June 30, 2007.


This article was written by Lars Jones and is the intellectual property of World Casino Directory.  Reproduction of this article in full is strictly forbidden.  You may use small snippets as long as you link back to the original source with trust. Data compiled from various sources as cited as well as the Mississippi Gaming and Hospitality Association and the Mississippi Gaming Commission.

Biloxi, Mississippi has 11 casinos in which you'll find more than 11,384 slots and gaming machines. There are a total of 410 table games. The minimum bet we've found at casinos in Biloxi is $0 and the maxium bet is $25. Click a casino on the left for more information on a particular property.

There is poker in Biloxi! You will find over 44 live poker tables to play at. You will find the following games in Biloxi casinos: NL Texas Hold'em, Omaha Hi-Lo, Limit Holdem, No Limit Holdem, 7 Card Stud, Pot Limit Omaha, Pai Gow Poker, Texas Hold'em, Omaha. Some Biloxi casinos also offer convention centers and meeting spaces. Over the entire town, you will find a total of 250,000 conference sq/ft space in the various casino properties. 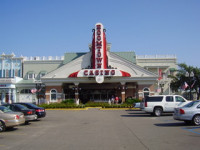 There are currently no news regarding Biloxi.