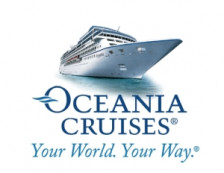 Oceania Cruises launched their first ship in 2002 and currently has a fleet of six ships. All of them offer gambling facilities. Founded by a team of cruise industry veterans, the company was acquired by Norwegian Cruise Line Holdings, LTD in 2014 along with a sister company, Regent Seven Seas Cruises. Norwegian (NCL) is headquartered in Florida. All of Oceania's vessels fly the flag of the Marshall Islands.

Two brand new Oceania class ships were commissioned from Italian builder Fincantieri and are the first two new builds for the company. MS Marina, at 66,084 tons can hold 1,250 passengers and 580 of the 625 suites and cabins have private verandas. Marina launched in 2011. Her sister ship, which launched in 2012, is the MS Riviera.

Two-week-long cruises are the norm for Oceania but they are most well known for much longer tours such as "Around the World in 180 Days" voyages and others lasting up to 195 days. The 6-month world cruises began in 2015. Bookings for the 180-Day World Cruises are taken up to two years in advance.

The casinos are rather small in relation to the overall ship size on some vessels, mainly due to the extended times at sea. However, they are also a favorite attraction of many oceanfarers. The gambling spaces are well designed and stylish and offer table limits for all levels of players. The gaming machines include reel and video slots and video poker machines.

Key card wagering makes the slots cashless. Casino credit is available to qualified guests and should be arranged one-month prior to departure. The minimum credit line is $10,000 and a personal check is required when you board the vessel in order to activate a credit line. All gaming is in USD and Euros can be exchanged on board.

All play is tracked and rewarded through the Casinos at Sea rewards program which has 5 tiers. Points can be transfered from ship to ship and slot players can redeem rewards at any time onscreen while playing any game.