Pimped Out Poker: Bling out the High Rollers by Seema Shah

With the global domination of Poker, it seems that everyone is getting in on the act. From movie stars to musicians, poker is increasingly filtering into everyday life. The ever mounting jackpot prizes, now averaging in the millions of dollars, and its lateral expansion into mainstream media such as the televised World Series of Poker on ESPN, Celebrity Poker on Bravo and the European Poker Tour on Eurosport, only prove the ability of gambling to constantly reinvent itself to appeal to Generation X. Today online poker seems to be the current guarantor of future growth within this industry. It will collude in bringing the world together in a way that has only been seen in one other industry (I’ll leave that to you imagination).

The front runners cashing in on this craze is within the world of hip-hop. Rappers such as Jay Z – a global empire unto himself – and Ja Rule are getting in on the game. Their access to the bling lifestyle has given them a unique edge on the hundreds of other online poker sites out there. You can now listen to your favorite hip-hop artist, as you play all the casino games, win bonuses like concert tickets and backstage passes, take advantage of exclusive sign-up bonuses and other unique promotions. 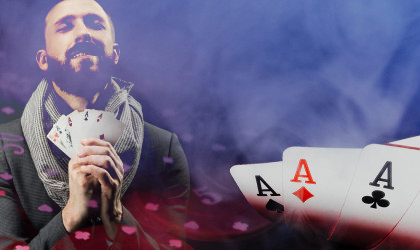 Rap artist Pony Boi, creator of MTV’s Sorority Life and Fraternity Life reality shows is also bringing a hip-hop poker show to the MTV generation. Called ‘Bring it to the Table’ in which members of famous rap collectives compete against each other in a poker game. In ‘Bring it to the Table’, two teams of famous rap collectives from different regions will compete in a poker game where the pot is a piece of their "Bling" (a watch, bracelet, or pendant). The winning bling will be auctioned off with all proceeds going to the winner's favourite charity.
More recently, Snoop Dogg has announced that he will be hosting a Rapper's Challenge Texas Holdem Tournament, a one-day poker tournament in the titillating city of Miami, onboard a Casino Ship at the Port. This no limit challenge is expected to draw celebrities and top poker players from across the globe. Twenty seats are reserved for pro poker champions and seats are still available for all challengers. A Celebrity VIP Charity Tournament will be going on at the same time with $50,000 going to the winner's selected charity.

Snoop Dogg will emcee, while his Uncle Reo cooks his famous BBQ on the top deck. There will be live entertainment throughout the day with famous rappers and other hip-hop artists. In the evening, the famed Monday Night FightKlub rap contestants will be competing for a $25,000 prize. The tournament, filmed for a future television airing, just highlights the opportunity for those with the vision to profit on this trend. The celebrity endorsement now gives a more holistic offering with sex appeal emulating from the wealth, jewels, fame, and fortune gained with each booty. Perhaps online casinos and the poker world in general should take note of the entrepreneurial spirit of hip hop stars and their ability to back a winner.