Texas Hold'em is probably one of the most dangerous card

games in the world to beat. Then why do so many people

play it? Your guess is as good as mine.

Here is a trivia question for you:

What would you say is a more dangerous game, Texas Hold'em or bullfighting?

If you are a bonafide Texas Hold'em player who has been around for a few years, you would probably answer without hesitation: "Hold'em."

I admit that bullfighting and even running with the bulls in Spain can be dangerous to your physical health. The only way to escape the pain of being gored by a bull would be to drink enough rum or Spanish wine before the charge and medicate yourself.

But Hold'em is such a risky card game, that sometimes I wonder why any person in his right mind would want to play it.

A deck has 52 cards and you are dealt just two of them. You are expected to make a winning hand with those two cards. A lot of players would find three words to describe that premise: im possi ble!

But people still play Texas Hold'em around the world and they are just finishing up on playing the World Series of Poker final table where one of three players will head for home with around $10 million! 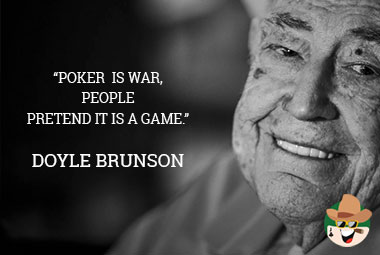 Years ago, I thought I was a pretty good Hold'em player. I lived in Southern California and actually made a living playing poker for nearly two years. We played seven card stud high and high-low, five card lowball draw and Texas Hold'em.

I was a pretty wild player in those days. I trained myself to be aggressive, did a lot of raising, and managed to grind out a decent living while staying at a motel owned by the Sahara Dunes Card Room in Lake Elsinore, CA.

Lowball was the most popular game at the Sahara Dunes, but for some reason Texas Hold'em came in like a hurricane wind and just knocked lowball out of the park. It was no contest.

I kind of resented that. I loved lowball with the joker. But time marches on and you have to go with the flow. Otherwise progress will leave you far behind.

The problem with Texas Hold'em is that too many people play too many hands. In poker you want an edge and it's difficult to get one in Hold'em.

There are ways, of course, to cut the odds against you.

One of the best ones is the re-raise when you are in position. While I haven't used it much, I believe it works because it makes the other person think you got a better hand than you actually have.

Position helps you immensely since you are the last to act after the flop. So, if you want to risk your money at Hold'em, be my guest. Just don't say I didn't warn you.

When you have position in Texas Hold'em, and position means either being behind the button or being to the right side of the button, you can play almost any two cards if there isn't a raise. Just be prepared to lose the pot if you don't hit your flop.

Being in position also gives you the opportunity to bluff when the table checks around to you on a scary flop. You make one stab and if you get called or raise, you just shrug inside and basically give up the pot.

No, Texas Hold'em is a dangerous game. And if somebody gave me the choice of either playing it for big money or fighting a bull, I think I'd take the bull.