When you are in cowboy country, the people make their

own fun. And one day in Clovis, N.M., a rancher put together

a jackrabbit hunt and poker tournament. 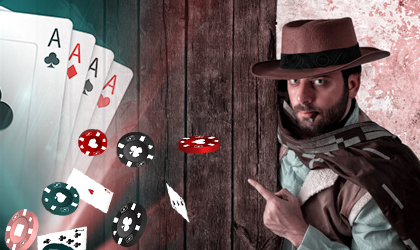 The call came just before noon. It was from a rancher who gave his name as Bill Clemson and he wanted to speak to a reporter. The receptionist gave him to me.

"I have two questions for you," he said. "Do you like hunting jackrabbits and do you play poker ”

"My answer is yes to both questions," I declared.

"Good. You're invited to my ranch Saturday. I own the Skyline and I'm about 22 miles east of Clovis. I'm hosting a jackrabbit hunt that will start about 6 a.m. It will be followed by a barbecue of some of the best beef in New Mexico and at 7 p.m. I plan to host a poker tournament in the bunkhouse. Buy-in is $100 and I expect somewhere between 300 and 400 players to enter."

It took about 30 seconds for me to ask him to count me in.

Quay County was overrun with jackrabbits. I loved the challenge of pursuing the floppy-eared jacks over the New Mexico prairie country, but the added inducement of a poker tournament and good barbecue beef was cream on the dessert.

I set my alarm clock for 5 a.m. Saturday and followed Clemson's directions to his ranch. It was a bright warm Land of Enchantment morning. The antelope were out racing across the prairie lands. They never jumped over the barbed wire fences -- they slipped under them.

When I arrived at the ranch, I was amazed at the number of cars, pickup trucks and horses gathered around the large stone building that was his ranch house. Bill Clemson turned out to be a big man, about six-foot two, who weighed over 200 pounds. He had a curling mustache and looked like a poker player. He welcomed me with a powerful handshake and poured me a cup of coffee.

He presented me with two boxes of .20 gauge shells and I joined the other hunters. They had formed a square measuring one mile on each side and spread out at 100-yard intervals over the flatlands. He told us he would fire the first shot and the hunt was on.

"Kill a lot of jackrabbits, boys," he shouted. "They're eating up all the grass that my cattle need!"

When the rancher fired his shot, I started moving forward. Jackrabbits seemed to be everywhere and I got in a lot of shooting. We drove forward, pushing the jacks in front of us all morning. By late afternoon we could see the wall of the square in front of us. There were hundreds of jacks trapped between our line of hunters and the other three lines. Now we had to wait for the jacks to break through our line of hunters before we could shoot.

That day we killed an estimated 6,000 jackrabbits. Then we headed to the bunkhouse where approximately 40 tables had been set up. Delicious hot barbecue was waiting for us. After a sumptuous dinner, the cards started flying. The tournament lasted until about 2 a.m. I came in sixth and won about $800. 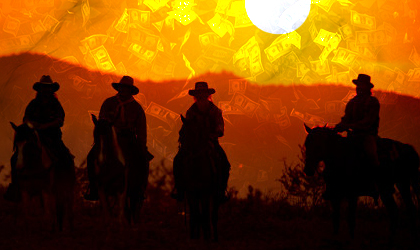 The rancher had even hired a band to play dance music. When one of the players got knocked out of the tournament, they could listen to the music, usually old country western tunes, or find a dance partner. A number of daughters of adjoining ranches had showed up for the barbecue so there were girls in abundance at the tournament.

The rancher walked me to my car when the tournament ended.

"How's that for some New Mexico hospitality" he said.

I quoted a saying of an uncle of mine by singing it to him: