The Atlantis 10 table, poker room is the only non-smoking room in the Reno area.  The room is open 24 hours a day.  The room offers limit and NL games and two daily tournament at 10a & 12p.

Players can call ahead to put their name on the waitlist. The wait list is visible on their web site poker page. Parking is covenient at the rear of the casino where the poker room is located.

Tables and chairs have recently been replaced and have autoshufflers.  There are  flat screen TVs visible from every seat.  Free beverages and soups are offered in the poker room. Tableside dining is available.

If you're a staff member or recent patron and would like to add photos or other info to this listing, please contact us at [email protected]. 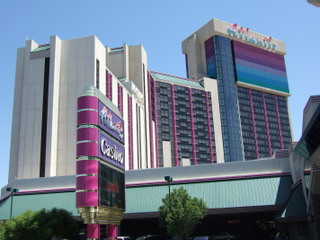 Me feeding the iguana (by popular demand)

Guest Posted on January 7th, 2008
I'll make this a quick one, full trip report to come.
I busted out of the tourney about 3 hours into day one. In the first hour I ran a set into a bigger set for about half my chips, then missed a a nut flush draw to knock me down to 3.5k. I busted in the last few hands at 100/200 when my AT got killed by KJ all in preflop to raptor.
Oh well, Leah and I are having a great time and i'll give a full trip report and soem good stories later.

Other Poker Rooms in Reno