The MGM Grand has a 13 table, non-smoking room that's very active and popular with tourists.  You may never know if it is night or day outside as the MGM Grand Poker Room provides a seamless transition and is open 24 hours a day, 7 days a week.  The room offers a variety of games (see above) and daily Texas Hold'em tournaments, including $1-$2 No Limit Hold’em, $2-$5 No Limit Hold’em and $5-$10 No Limit Hold’em. Any time of the day or night players can enjoy tableside food and drink service as well as a massage, Wi-Fi, comps, auto-shufflers, and many more amenities. The early morning hours are least crowded but there is always action.

MGM's poker room has beautiful tables and large, comfortable chairs with plenty of space between tables.  In addition, there are about 8 flatscreen TVs throughout the room.  The MGM maintains an automated waitlist system complete with handheld pagers to notify you when a seat is available. 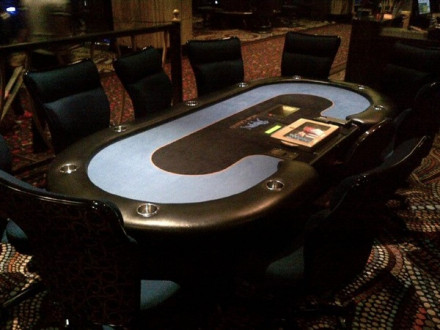 Guest Posted on January 9th, 2008
Impressions: This room is very enjoyable. Living in Vegas, I have had an opportunity to play pretty much every room in town at all days and hours. MGM is a fun room with an interesting mix of players. I have brought many people from out of town to play here. It has always been a positive experience.
Atmosphere: The room is spacious and very modern. There is a video board for the wait list, pagers that can be used while waiting for a seat, and the dealers swipe your players' card at the table to track your time for comps. The one negative, and this is always mentioned, is that there is a lot of noise from the Centrifuge bar in the evenings. However, I believe the noise chases away the local rocks and brings in the Los Angeles silk shirt crowd on the weekend.... It's a theory anyway.
Dealers: Nearly every dealer there seems to be very experienced, friendly, and technically sound. They do a pretty good job of keeping the game moving and have always thanked me when they are tipped.
Food: Drink service is one of the best on the strip. If you like strawberry smoothies, they have one they make there. I have never had one, but people rave about them.
Service: Wait time is about standard. Weekends can be up to an hour, but any other good room in town will be the same. They make an effort with the video waiting list and the pagers.
Comps: Standard $1/hour, with your card swiped at the table.

Guest Posted on June 16th, 2007
Impressions: This room is very nice with the best tables in Vegas. The management is also among the best. The only thing i don't care for is the load night club adjacent to the poker room. Its hard to hear anything in the evening when they're playing load music.
Atmosphere: The room itself is nice and spacious. I love the tables with the auto shufflers and the marble ring (for stacking chips) between the felt and the rail. The rails have nice cup holders. The tables feel solid. The chairs are very good. The night club next door is a negative.
Dealers: They seem very good to me.
Food: Better than average service.
Service: I have played 1/2 nl cash here many times and I dont think I've ever waited more than 5 minutes to get a seat. The last time I was there, there were 14 people ahead of me on the 1/2 list. I walked around for 5 minutes and they had a seat for me at that point. Excellent job!
The tourneys are well run too, although the rake is too high ($125 game, $25 goes to the house and $100 to the pot).
Comps: Don't know, didn't ask.

Guest Posted on April 20th, 2007
First two hands, her KK hold up, then she hits a flush on the river. After 10 minutes she’s up about 140 and I’m telling her to warn me if she’s gonna play a hand so I can fold. She replies “oh come on, I’m friendly” with a touch to my arm. She starts showing me her cards when I’m out of the hand, small talk about the Dave show, where we’re from, how long we’re in town (it’s her last night), she tells me I have nice eyes, I return the comp, blah blah blah, and with each blah she’s either touching my arm or my knee. Giggity.
Nate and Jon are wandering around the poker room and come over to watch my table, but really her, and I slip Jon my phone so he can take a front view picture (who wanted a picture two paragraphs ago, I know). Notice those… chips.

I get distracted by poker for a little while, and flop a set, top two pair, and a flush almost consecutively. Then hottie starts racking her chips and I’m all “awww you’re leaving?” and she’s all “yeah my boyfriend’s on his way”. They call my name for 4-8 and I bounce, up $94 after an hour.
My first hand I get red88 in the BB. I raise and get 3 callers. Flop comes as raggedy as can be, with no face cards, and just two clubs to worry about. I lead out with a bet and everyone calls. The turn is a glorious 8s, and I check, next check, bet, fold, I raise, bettor calls and shakes his head like he knows he shouldn’t be in the hand. River is a 2c, I bet, he raises, I call, and he apologizes for playing Qc 6c.
Just like Crasian the night before, this guy would be my nemesis at this table. For a while at least. He’s cleaning up and barely can look at his cards with a wall of chips in front of him. I go about an hour without playing outside my blinds, and when I play those, Nemesis takes them on the flop.
Finally something: KK in late position. I’m re-raising, but someone else caps it at $20 with FIVE callers. Come on cowboys. Flop comes 5c 6h 9h. A loose guy bets out, call, call, I raise, loose re-raises and goes all-in for his last few chips; I just call that re-raise and two others call as well. River’s a 5h. Not exactly a good card for me, but it gets checked around and I bet it to see where I’m standing. Two callers and nemesis folds. Looks good. River looks fantastic: Kh, giving me the 3rd-nuts, a boat. A caller from before now bets out, and I raise, and he re-raises. I pause and for a second get scared that he has either 7h8h, for the absolute nuts, or pocket 55. Those thoughts make me just call, and Steve shakes his head at me for not re-raising. Other guy shows Ah9c, so top pair that became a flush on the river with that beautiful Kh.
Two hands later I’m on the button with AdQd. Nemesis raises; I re-raise; he calls, and everyone else folds. Flop is Q Q X. He checks; I bet; he calls. Turn’s an A. He checks; I bet; he calls. River’s a T. He checks; I bet; he calls and mucks. Thanks for that.
Very next hand, 6c7c that I feel gambly with and call a 4-way cap pre-flop. Flop is 3c 4h Jd. I feel like I have the right odds with a gutshot and backdoor flush draw after a bet-call-call before my turn to act, and I call. Turn is a 3h. Check, check, bet, I try to represent the 3 and raise. Fold, fold, bettor re-raises, I call (yeah stupidly here but the pot was humongous and I was feeling gambly). River is another 4 and no straight for me. He bets and I muck. He shows JTo for just top pair. Oh well, so I drop 60 on that hand after +240 on the previous two.
I win a few small pots, and a while later, an African-American woman sits down, plays every hand she gets, and 80% of the time angrily mucks her hand at the showdown but doesn’t say a word. She will be known as Angry Black Woman (ABW) from this point forward. ABW gets into a heads-up raising war with Nemesis, who gets her to go all-in eventually and shows the nut straight.
ABW re-buys and now I get to play against her in my last hand before heading back. I raise UTG with Ac7c, and she’s the only caller. Flop A 2 T. I bet; she calls. Turn’s a 7. I hesitatingly check; she bets; I raise; she calls and glares at me. River’s a 4. I bet; she calls and mucks. She’s down to less than 10 chips again, and wants to re-buy, but the dealer’s out of chips because she’s been dispensing them so fast. I offer to sell her a rack or two and the dealer approves, but ABW’s having none of that, and mumbles something in my direction. Whatevs. I rack up and cash at $504, +$310 from that table, and we walk back to Bally’s at 4:30 to sleep.

Guest Posted on December 9th, 2006
Impressions: I visited a few poker rooms during my last trip, a few weeks ago, and kind of liked this one as much as any other. There is a bar right next to the room, and it is close to a night club, so expect some noise and music, but I liked the hip, modern feel to it. It is a terrific room, and I would highly recommend it to my friends. Picked up some good games, very competitive. Players at my table seemed to know what they were doing, by and large, and I came out on the plus side. It is nice to have some patsies to play with, but I get satisfaction in besting better players.
Atmosphere: Plenty of space between tables, with very comfortable chairs, which is most important to me, as I have back problems and get thrown off if I am hurting. The many large plasma screens in view can be distracting to some players, but I find it relaxing in between hands, or when I have folded and want to get my head away for a few minutes.
Dealers: No complaints here. The best description would be professional. They ran their games well and fast, and I noticed that they were polite with the few new players, not lording it over them, and correcting them if they failed to know the rules. Basically, keeping the chatter down, handling pots and change easily are what I look for in a dealer, and I found them at the Grand.
Food: The ladies were quick with the drink service and pretty friendly. My table mates seemed to be happy, particularly when our server turned out to be very pretty. I was not into food, so did not pay attention to food service. I carry some health bars around with me, and do not care for poker room food anyways. There are always good restaurants around most of these hotels, and I would rather enjoy a relaxing meal away from the poker.
Service: They really know how to manage tables here. Seat availability is tracked on a panel of buttons in front of the dealers, so seating is fairly quick. The wait list was visible from anywhere on big screens. I rarely had to wait longer than ten minutes. Chips were promptly brought to your table, and you could get right into the game. In short, the staff was very helpful and did not lord it over you, like in some other Vegas rooms. You felt that you were welcome here.
Comps: I'm not familiar with the comps here. In fact I never am interested, because they never amount to much, so why bother?

Other Poker Rooms in Las Vegas