The Gold Coast Poker Room has been moved to The Orleans.

The Gold Coast has 8 tables of limit and no-limit action in a non-smoking room.  The room is open, but located in a back corner of the casino so it's not too noisy.  The tables and chairs are in good shape and there are auto-shufflers on the tables.  There is no eating at the tables, and the room is equipped with 6 plasma screens that are easily seen from the tables. 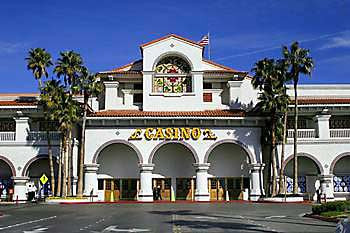 Guest Posted on August 5th, 2007
**will be posted in segments**
**will contain pictures, but they might be big, and some are from a cell-phone, so they’ll be crappy**
**amount of non-poker vs. poker content will be adjusted based on reader preferences**
**cliff’s notes will be posted at the end of each segment**
First, some backstory. I’m getting married in May, and this trip was my bachelor party. All of us are between 26 and 32. 2p2er D-FENS (aka “Steve”) has been planning it for at least 4 months. Real pictures of all participants will be included later, but let’s start with this:

Quick poker/personal bio of each, L to R, top row first:
Matt: Real loose-aggressive, sticks to NL. The person who sent the email leading to <a rel="nofollow" href="http://forumserver.twoplustwo.com/showflat.php?Cat=0&Number=9557610&page=0&fpart=all&vc=1">Scotty's bad beat while teaching.</a>
Dave: Hard to tell re. poker, except he plays a ton of of 4-8 and PL HE in Phoenix at the Double Deuce club. My little brother. Has a side-job in Phoenix as a distributor of energy bars & drinks, so he brought along a couple cartons as party favors for everyone.
Alex: Best NL player of the bunch. Creative & crafty at poker and life. He put together the above picture as a CD inlay for the trip's soundtrack album (another party favor). Fraternity brother & ex-roommate.
Jon: Decent home game player, but never played in Vegas. Goes to school & plays soccer w. me.
Sam: Limited poker experience but knows the basics. Goes to school w. me and is an ex-roommate. Routinely pwns me in frisbee golf.
Steve: Tight-(usually) aggressive textbook limit HE specialist. Fraternity brother & another ex-roommate. Budget planner extraordinaire.
Scott: tries to play limit like Steve but not as good. Me. If you look closely at the picture you can probably figure out my real last name.
Nate: NO poker experience prior to trip. We taught him in the airport. Goes to school with me & is on quest to drink 365 different beers this year.
Ubaldo (Rolf): Some poker experience but still learning. Fraternity brother & my world cup trip companion last summer. Married w. one kid and doesn’t get to see the rest of us very often, so when he does, he goes big.
Part 1 (low poker content)
Steve, Alex, Matt, Nate, & I leave Chicago Thursday night. We travel balla-style with just carry-ons, except that means we have to watch out for the liquids police at security. I have a full-size tube of toothpaste in my backpack. Beat: Security pulls the backpack to inspect after it’s scanned. Brag: they only wanted to check out my frolf discs in the backpack. They pull those out and laugh, and don’t even open the toothpaste pocket. OK so that’s not that big a deal, but to me it was a good omen for the trip.
Security beat for Alex: Alex has with him an ¾ empty jar of honey that he likes to scoop fingerfuls out of for occasional energy boosts. Of course, security pulls it, and despite his efforts to dissuade them, they confiscate it. But to prove to them that it’s just honey, he eats the rest of it before they throw it away.
Our flight’s delayed an hour, so we teach Nate Hold’em via a $1 buy-in sit-n-go in the O’Hare food court. I pwn the sng after a hand against Steve where I hit a set of 7s on the flop, Steve straights on the turn, and I quad the river. SIHB. Another good omen for the trip. All of us except Steve yells and cheers, and everyone looks at us.
We leave Chi around 11pm, so I try to sleep on the plane, but can’t because of the douchenozzle (Steve’s term) behind me who can’t stop talking to his row-mate about his condo and flying to Japan all the time for work. I couldn’t see what the guy looked like but had a picture made up in my mind, and he confirmed it. He’s the one looking down, in the blazer-over-tshirt combo.
Since I can’t sleep, I pull out Steve’s SSHE, re-reading the first half to bone up for the trip. It would help.
Arrive in Vegas, where Dave is supposed to pick us up since he’s driving in from Phoenix. He gets stuck in Hoover Dam traffic, so we get in line for a cab. 50 minutes later we’re at Gold Coast, where Dave has already arrived during the time we waited for a cab. We check in at GC and get two balla suites on the 10th floor w/o any sort of $20 tip or sweet-talking the clerk.
First stop, GC restaurant for $1.95 eggs-n-bacon, which we budget-balla w. coups for $1 each. Between Steve, me, & Alex, we’ve got two of the Tony Curtis pocketbook-o-values, and three American Casino Guides. Add to those all the coups you get in the players club funbooks, and budget-ballin will be a theme for the trip.
We each down a few free (coups again) stiff drinks from the bar and head upstairs for some more ballin’. Bowlin’-ballin’ that is. You heard me. $1 games after midnight Mon-Thurs, and that includes a free drink w/ your game. We buy 3 games + shoes for $5.50/person. First game warm-up, then we make a few wagers. Steve beats me & Alex in the second game for $10 each. Dave & I have a heads-up going at the same time; I’m down $20 after game 2. Nate bowls the game of his life with a 192 that second game, but refrained from betting beforehand (beat). Game 3 I ask Dave for double-or-nothing, and I pwn him 186 to 152.
Steve & Dave are itching to play cards and settle in for some 4-8 from 4 to 6am, but I go to bed and get a few hours of that Vegas sleep where you don’t really sleep.
--end of part 1--
summary: Alex eats a lot of honey. Nate learns Hold’em. Scott pwns Steve at $1 buy-in sng at ORD. Douchenozzle on flight. Budget ballin’ & bowlin’ @ Gold Coast.

Guest Posted on March 28th, 2007
Impressions: Not much of a "room", just a roped off area of the casino floor. Something about this room does not feel right. Would not go back! I did not like the clientele, the ambience, etc. Plenty of great rooms in town & no need to play here.
Atmosphere: Some tables have auto shufflers & some did not. Mine did. The table had a vinyl cover, not felt. As pointed out above, there is no ambience to this little area, near a bar.
Dealers: The dealers were just OK, no complaints. The dealers at my table, & I did play for about 2 hours, did not have much personality, or smarts, but did not make mistakes & kept things going.
Food: The proximity to bar kept the drinks flowing, & waitresses were friendly and efficient, so one good feature for the drinkers. That is not a good reason to come to a poker room.
Service: There was not much play when I was here, so no problem getting a table. The management were pleasant enough, but they did not seem to have much to do, so we don't know how they would act in a busy situation
Comps: They give $1.25 per hour for the first 4 hours, and then $1.00 per hour for the next four hours.

Other Poker Rooms in Las Vegas